1.1 Pronunciation
The rules for the pronunciation of Dutch are very consistent and easy to learn. Pronunciation is a distinctive and therefore essential component of a language. It is in the interest of the student’s progress that the following characteristic sounds of Dutch be learned thoroughly. For pronunciation, more than any other element of the language, the rule that practice makes perfect holds true. The following sounds are different or unknown in English but quite common in Dutch.

1.2 Vowel sounds
1. a- (short a-: between duck and dock). The a- is found in words such as pak (parcel, suit), and plat (flat).
Exercise 1. Practice the a- sound in the following words by reading them aloud: plat, kranten, dag, zakken, pak, vast, wal, klap, ratten, gat. 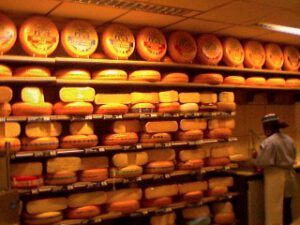 It is produced by shaping the mouth for the vowel sound in the English words by, why, etc. but opening the mouth much wider). It is found in Dutch words such as: kaas (cheese) and gaan (to go) and also in open syllables, i.e. in syllables ending on a vowel, as in maken (to make) and praten (to talk).

Note i: There is en essential difference in meaning between such words as plat (flat) and plaat (picture, record), mak (tame) and maak (to make), etc. This difference is determined by the difference between the short and the long a- sounds. It is therefore very important to distinguish clearly between these sounds. Mispronunciation may, in may cases, lead to serious misunderstandings. Here are a few more examples: tak is branch in English, but taak means task; man has the same meaning as man in English but maan means moon.

Note ii: The plural of tak (branch) is takken (branches); this means that the consonant has to be doubled, otherwise we get taken (tasks), the plural of taak (tasks). This doubling of consonants after short vowel sounds constitutes a rule which applies to most words spelled like tak-takken, for example to lap-lappen (rag-rags) and zak-zakken (bag-bags).

Note iii: The a- sound in tak-takken, etc. is “short” because they are single and followed, in the same syllable, by a consonant (t, s, k, n, etc.). The plural in Dutch is generally formed by adding -en as in the examples above.

If the last syllable of a word is not stretched, the plural is often formed by adding an -s, as in English: thus the plural of tafel (table) is tafels. The plural of raam (window) is ramen (windows). The last word consists of two syllables: ra- and -men. The second a- is dropped because the a- is the last letter of the syllable. If the last letter of a syllable is a vowel, we say that that syllable is open: ra- is thus an open syllable and the single a- is pronounced like an aa- (the long aa-). There are, in other words two ways in which a long vowel sound can be formed: by doubling the vowel concerned, eg., aa- as in kaas or having it at the end of a syllable, as in ramen.

To determine the number of syllables that make up a given Dutch word, it is best to pronounce it slowly: ra-men. Again, if the last letter of a syllable is a vowel, such as an a-, this vowel is pronounced as though there were two a’s: raa-men. This spelling (i.e. with two a’s and a hyphen) is not normal and is here only used to indicate that the word concerned consists of more than one syllable. Words like praten (to talk), betalen (to pay), gapen (to yawn) and halen (to fetch) also contain open syllables (pra-ten, be-ta-len, ga-pen, ha-len).

3. o- (short o-: more or less as in English more, for, etc. but quite short). It is found in Dutch words such as bos (woods) and kop (head of an animal).
Exercise 4. Read the following words aloud: rond, los, toch, vossen, kost, lokken, vol, op, bronnen.

4. oo- (long oo-: as in English go and low but without the glide towards w). It is found in Dutch words such as groot (big, large) and rood (red).
Exercise 5. Read the following words aloud: knoop, vroom, roos, kroon, boos, droog, hoofd.

Note iv: As in the case of the a-, o- is pronounced oo- if the syllable in which it appears is open, such as in bomen. If this word is split into two syllables, we get bo-men. This word is therefore pronounced boo-men, but may not be spelled this way. We find this situation in words like wonen (to live), dozen (boxes), symbolen (symbols), probleem (problem), and over (over). (do-zen, sym-bo-len, pro-bleem, o-ver).

Exercise 6. Break the following words up into syllables: kloppen (to knock), kopen (to buy), sloten (locks, ditches), doden (to kill), volgen (to follow), roken (to smoke) and stoppen (to stop).

6. ee- (long ee-: more or less like the English ay- as in say, crazy, etc. but without the glide towards i). It is found in Dutch words such as veel (much, many) and steen (stone, brick). If e- is in an open syllable, as in stegen (ste-gen), the word is pronounced stee-gen, but never spelled that way. This is also the situation in words like breken (to break), weten (to know), vergeten (to forget) and spelen (to play).

Exercise 8. Break the following words up into syllables: geven (to give), lekker (nice), eten (to eat), vreten (to eat like an animal), kerken (churches), kennen (to know a person or to know as a result of having studied it) and weten (to know a fact or because you were told).

Note v: The explanation of the difference in pronunciation of e- and ee- only applies to words in which these sounds receive the stress. If the e- sound is unstressed, such as in words like lopen (to walk), bedanken (to thank) and also in de (the), the e- is pronounced as in similar words in English, such as father, paper, etc.

7. u- (short u-: heard in English words like bird, sir and fur). It is found in Dutch words such as bus (bus) and krul (curl).
Exercise 9. Read the following words aloud: stuk, knul, nummer, juk, lucht.

8. uu- (long uu-: this sound is completely unknown in English. It is produced by shaping the lips as for the English sounds under 7 or the Dutch ee and then pouting the lips as though you were going to whistle or kiss). It is found in Dutch words such as vuur (fire) and muur (brick wall).
Exercise 10. Read the following words aloud: minuut, schuren, duur, gruwel, puur, ruzie, muziek, stuur.

Note vi: If the u- appears at the end of a syllable, it is pronounced like uu-. This is the case in words like muren (walls), avonturen (adventures), evalueren (to evaluate), rumoer (noise) and vuren (fires).

9. i- (short i-: similar to the English i in sit and this). It is found in Dutch words like zitten (to sit) and blik (tin can).
Exercise 12. Read the following words aloud: ik, klimmen, flink, binnen, in, vinden, zingen, kring.

Sometimes the i- is long (as in -ie below). We find this in words like radio, idee, and kritiek.

10. ie- (long ie-: heard in English words like seen and green but not stretched). It is found in Dutch words such as lied (song) and vriend (friend).

Note vii: i- does not have a long variant: i- and ie- are, in fact, two practically unrelated sounds.

11. eu-: This is a special vowel as it consists of two letters but comprises only one sound. 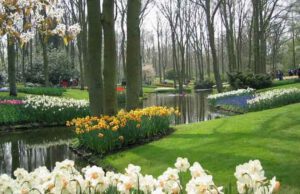 It is unknown in English. It is formed by shaping the lips and tongue for the oo- sound after which the tongue is lowered and pulled back somewhat. It appears in Dutch words such as neus (nose) and keuken (kitchen).Keukenhof in Nederland

12. oe-: This sound is comparable to the vowel sound in English words such as dew, do and two. It is found in the Dutch words vroeg (early) and toen (then – past tense).
Exercise 15. Read the following words aloud: voelen, voet, boek, moeten, bloed.

1.3 Diphthongs and double vowels:
1. ei-/ij-: There is no difference between the pronunciation nor between the functions of these two symbols. The sound resembles the ay- sound in the English words say and take, including the i- sound at the end but shorter. The meaning of the Dutch words rijst (rice) and reist (the verb travels) can, in spoken form, only be determined by the context in which the words appear.
Exercise 17. Read the following words aloud: mij, mei, jij, wij, krijgen, dreigen, slijten, zeilen, blijven, slijterij, klein.

2. au-/ou-: As with ei-/ij-, there is no difference between au- and ou- except in the spelling, and in this case not even in the meaning. The spelling can only be explained historically. The sounds appear in Dutch words such as gauw (quickly) and goud (gold) and is comparable to the vowel sound in the English word now.
Exercise 18. Read the following words aloud: mouw, dauw, verkouden, vrouw, hout, zout, flauw.

3. ui-: This is apparently one of the most difficult sounds to produce for English speaking persons. It is formed lower in the mouth and by rounding the lips a little less than for the uu-. The sound produced is between the ou- and the eu-. It is found in the Dutch words huis (house) and vuil (dirty).
Exercise 19. Read the following words aloud: ui, fluiten, tuin, gebruiken, kruis, besluiten, stuiten, uit, vuist.

Note viii: Diphthongs have no long and short forms. There is therefore no doubling of either vowels or consonants if the stem of a given word contains a diphthong. The plural of vuist (fist) is vuisten (fists) and of kruis (cross) it is kruizen (crosses).

1.4 Consonants
Consonant sounds different or unknown in English but quite common in Dutch are: 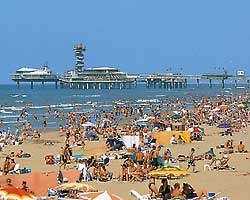 In practice there is little noticeable difference between the g- and ch-. The sound is formed inScheveningen the back of the mouth and is produced by a rasping or friction between the upper and lower part of the throat. It is found in Dutch words such as acht (eight) and gras (grass).
Exercise 22. Read the following words aloud: Gregorius, grijs, vechten, achter, zwijgen, God, groeten, achtentachtig, bisschop, schrijven, prachtig.

2. j-: This letter is always pronounced like the English y- and it appears in Dutch words such as ja (yes), jij (you) and bejaard (aged).
Exercise 23. Read the following words aloud: jij, Jacob, jaar, joden, Jansen, Jan, jas, jong, jammer.

4. w-: The Dutch w- is almost like the English v-. The English w- has no equivalent in Dutch. The Dutch w- is found in words such as water (water) and wijn (wine).
Exercise 25. Read the following words aloud: waarom, waar, wie, nieuw, wij, eeuwen, bouwen, wekken, ontwaken, winkel.

Note ix: A d- at the end of a word is pronounced like a t-. This happens in words like rood (red) and bekend (well-known).

Photos in the Netherlands